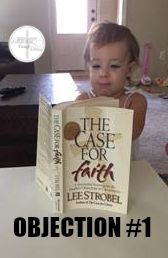 I’ve been thinking lately (for a while, actually) about how I’d like to be proficient in the area of Apologetics in regards to my Christianity.  For one reason, I love to learn.  When I learn, I gain confidence.  For a second and more compelling reason, I’d like to be able to adequately defend the faith for which Jesus died and for which I stand.  I know that many atheists and intellectuals (I bet some pedant is rolling his/her eyes at my use of this blanket term right now; please #lookatmesideways because I can handle it.) believe Christians to be blind followers of a faith not steeped in logic.  And to be fair, there is a certain amount of disbelief that must be suspended in order to have faith, what Hebrews 11:1 defines as “being sure of what we hope for and certain of what we do not see.”  Sounds incomprehensible, right?  Perhaps one might even say supernatural?

I am also aware that many of these same disbelieving people subscribe to the idea that Christians as a whole are not very smart.  While I don’t have a bunch of letters behind my name, I do have a bona fide college degree, and I’m no idiot.  With that being said, I’m also lucid enough to articulate my lack of expertise in philosophizing.  And even though I’ve been saved since 2001, I still have loads to learn regarding God’s Word.  So what is my point?  My point is that I want to be adept at discussing Apologetics so I decided to start by reading a book I found recently at Goodwill called The Case for Faith (a companion of sorts to The Case for Christ) by Lee Strobel.  Lee Strobel, a former atheist, has a Master of Studies in Law degree from Yale Law School and was also an award-winning legal editor for the Chicago Tribune.  Do I think I’m an expert in Apologetics after reading this book?  No.  But I do have a firmer grasp on some pivotal emotional objections people have concerning Christianity and our God.

Introduction: The Challenge of Faith

Lee Strobel opens his book with an interview with Charles Templeton, a former ministering colleague of Billy Graham.  This interview with Templeton, no longer a Christian but an Agnostic by this time, helps probe the question highlighted in the very first objection of this book.  Templeton says regarding doubts about his Christian beliefs, “I lacked the intellectual skills and the theological training needed to buttress my beliefs when–as was inevitable–questions and doubts began to plague me…My reason had begun to challenge and sometimes to rebut the central beliefs of the Christian faith.”  The two men discuss why suffering exists if an all-powerful God can stop it.  Templeton believes it impossible that anyone described as a loving God can possibly exist when evil is so rampant.  Interestingly, though, he becomes sentimental towards the end of the interview, talking about his great admiration and love for Jesus Christ, saying, “he is the most important human being who has ever existed…I…miss…him!”

OBJECTION #1: Since Evil and Suffering Exist, A Loving God Cannot

Lee Strobel asks, “Does the presence of suffering necessarily mean the absence of God?  Is this obstacle to faith insurmountable?”  Although this certainly seems to have been the case for Charles Templeton, must this be the case for everyone?

In his second interview of the book, he confronts Peter John Kreeft, PH.D. with this first objection.  Dr. Kreeft asserts that Templeton’s belief that there can be no possibility of a loving God due to the prevalent evil on Earth is “intellectually arrogant.”  He further contemplates, “How can  a mere finite human be sure that infinite wisdom would not tolerate certain short-range evils in order for long-range goods that we couldn’t foresee?”  Kreeft offers some astounding and compelling analogies to illustrate that perhaps the existence of evil is actually evidence for and not against God.  He goes on to pontificate that using a standard of good to judge evil means that we as humans are aware of what ought to be, therefore, supporting the notion that there is a reality called the Supreme Good, another name for God.

Kreeft then tackles the presence of evil through an atheist’s lense.  Excluding creationism, he supposes the world is the result of evolution.  If this is true, then the universe has been evolving for an infinite amount of time, thus everything should by now be perfect and evil vanquished.  He says, “Atheism is cheap on people, because it snobbishly says nine out of ten people through history have been wrong about God and have had a lie at the core of their hearts…Also it robs death of meaning, and if death has no meaning, how can life ultimately have meaning?”

Towards the latter part of the interview, Kreeft examines three divine attributes in light of the existence of evil: 1. God is All-Powerful, 2. God is All-Knowing, 3. God is All-Good.

2. God is All-Knowing:  Kreeft talks about dei-cide, the tragedy of all tragedies that ultimately resulted in the opening of the heavens to human beings, which is a GOOD thing that came out of a wholly evil execution.  Kreeft remarks, “The greatest Christians in history seem to say that their sufferings ended up bringing them the closest to God–so this is the best thing that could happen, not the worst.”

3. God is All-Good:  Kreeft conjectures, “God is wise enough to foresee that we need some pain for reasons which we may not understand but which he foresees as being necessary to eventual good.  Therefore, he’s not being evil by allowing that pain to exist.”  He goes on to say that, “Dentists, athletic trainers, teachers, parents–they all know that sometimes to be good is not to be kind.”

MORE CHOICE MORSELS FROM THE FIRST CHAPTER INCLUDE:

“Dear friends, do not be surprised at the painful trial you are suffering, as though something strange were happening to you.  But rejoice that you participate in the sufferings of Christ, so that you may be overjoyed when his glory is revealed.”      (2 Peter 4:12-13)

And it will be revealed.  Even if you don’t believe it.

Lauren is a wife to an awesome man of God and a new mommy to a fearfully and wonderfully made princess! She also has two fur children, Hank and Lola. Lauren graduated from LSU with a Bachelor of Arts in English. She has been a writer as long as she can remember and wants to use her gift to glorify God. Lauren believes in the power of the Word and wants to encourage all believers with practical and biblical wisdom. Lauren is blessed to be able to stay home with her daughter full time! She loves to attend church, write, read, and sleep in her spare time.

Latest posts by Lauren (see all)

This website uses cookies to improve your experience while you navigate through the website. Out of these, the cookies that are categorized as necessary are stored on your browser as they are essential for the working of basic functionalities of the website. We also use third-party cookies that help us analyze and understand how you use this website. These cookies will be stored in your browser only with your consent. You also have the option to opt-out of these cookies. But opting out of some of these cookies may affect your browsing experience.
Necessary Always Enabled

Any cookies that may not be particularly necessary for the website to function and is used specifically to collect user personal data via analytics, ads, other embedded contents are termed as non-necessary cookies. It is mandatory to procure user consent prior to running these cookies on your website.